Cooks and those they cook for all love chocolate. It’s Carolyn today and I see in other food blogs I follow that people light up for chocolate recipes. Our readers loved Amy’s recipe for Chocolate Mole Dulce Cake a few weeks ago. Today I’m going to give you a recipe for combining chocolate and mesquite. The two flavors enhance each other perfectly, making for creamy, caramel-y, chocolate-y deliciousness. And rich. You always want rich with chocolate.

I usually make my mesquite broth starting with pods. Most mesquite pods appear in late June to early July, but there is usually a small fall crop as well. Even with our very scanty rains this year, I see lots of new mesquite pods on trees in our neighborhood. The crop is much smaller than the early summer crop, but you can probably find enough pods to make this recipe. If all you have is the mesquite meal from a previous year, that will work as well.

For the liqueur in the recipe, which is optional, you can use coffee liqueur (like Kahlua), maybe hazelnut, or whatever you have on hand and like. Or you might even substitute a little strong coffee.

Gather a basket of mesquite pods. Remember to gather only from the tree, never from the ground. Some people say the ones with red stripes are sweeter. I can’t tell the difference myself.

To make mesquite broth, slowly simmer 2 cups of broken pods in 4 cups of water for about an hour until they are very soft. When cool, wring and tear them (hands in!) to release the sweet goodness into the water. Strain.  You can get more details in my previous post on mesquite broth here. If you don’t have the pods, you can make broth with mesquite meal. For this recipe, combine 1/2 cup mesquite meal with 1 1/2 cups water and stir until completely dissolved. You may have to use a whisk. If your mesquite meal is coarse and doesn’t totally dissolve, strain before making the Mesquite Mousse. 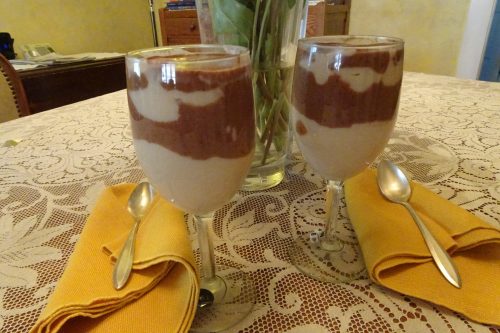 These wine glasses contain a rather large serving of this rich dessert. But it is so delicious, you’ll probably finish it off anyhow.

Combine mesquite broth and milk in saucepan. In small bowl, combine water and cornstarch and stir until smooth. Add to mesquite mixture. Cook over low heat, stirring constantly, until thickness of pancake batter. Turn off heat and let cool for about eight minutes. Stir occasionally to keep skin from forming. If it has a few lumps, beat with a whisk until smooth. Meanwhile beat eggs in small bowl.

Divide the mixture, taking out half which is about two cups. Put it in another saucepan, and stir in ¼ cup cocoa and ¼ cup sugar. Stir over low heat until cocoa is incorporated, about 2 minutes.

Layer mesquite and chocolate mixtures in small wine glasses and chill until set.

In just two weeks my new book A Desert Feast: Celebrating Tucson’s Culinary Heritage will have the official publication date. It’s already in

the warehouse and ready to ship. Five years ago Tucson was named a UNESCO City of Gastronomy and this is the story of why a desert town received that honor. All history is a series of stories and A Desert Feast tells in lively stories how the residents of the Santa Cruz Valley developed from hunter-gatherers to corn growers to cattle raisers to today’s sophisticated consumers where prickly pear even goes in our local craft beer. We’re going to have a big rollout party in October, but if you can’t wait, ask your local bookstore to order it for you. For more mesquite recipes, check out Cooking the Wild Southwest: Delicious Recipes for Desert Plants.

3 thoughts on “Mesquite and Chocolate: A Love Story”