Every year in late April and early May, Tucson residents and visitors celebrate the agave plant in all its glory with dinners, cocktail demos, mescal and bacanora tastings, demonstrations and fiestas. It’s Carolyn today and for the third year, I’ve taken part in the agave roasting at Mission Garden.  The agave plant is a succulent that thrives in arid conditions and when roasted becomes very sweet. It is the defining ingredient in mescal and tequila. It has also been used for thousands of years by the Native Americans as food. The Hohokam even planted agave fields stretching over 1,200  acres in the north end of the Santa Cruz basin. It was a crop that needed little tending and propagated on it’s own by sending out pups. Anthroplogist Suzanne Fish estimates that the Hohokam in the area could have harvested up to 10,000 agave plants annually.

There are many species of agave. We’re not sure how many kinds were used by the Native Americans. (MABurgess photo)

Historically, the stiff and thorny leaves were cut from the agave and the hearts are baked in an earth oven. The people just chewed the pulp from the fibers. Then there was a step up in technology when the hearts were steamed and roasted, crushed and used to make tequila, mescal and bacanora. Here is a link to a demonstration of a old-fashioned bacanora “factory” in Mexico. Of course, today the big commercial mescal and tequila makers use industrial ovens.

But during Agave Fest, we like to celebrate the oldest traditions, so Jesus Garcia demonstrates baking agave in an earth oven.

Jesus Garcia placing an agave heart in an earth oven on the grounds of Mission Garden. (CNiethammer photo)

Because we don’t all have earth ovens, I am in charge of the home-baking demonstration. I wrap the hearts securely in heavy foil and bake them for about 10 hours at 350 degrees F. (If you try this, be sure to put a foil-lined pan under the agaves because even the most securely wrapped hearts leak sugary juice.) 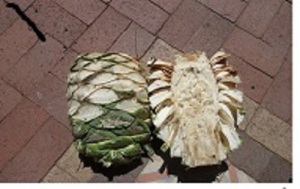 Agave heart split in two so it could fit in my home oven. 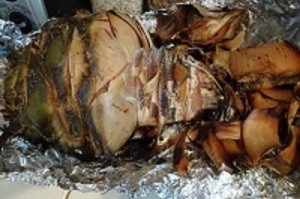 This is what the roasted heart looked like after 10 hours. The core on the right is where I removed some of the leaves.

The next challenge is to get enough pulp from the fibers to actually make something. The Native Americans just chewed on the baked leaves and discarded the fibers. Distillers and people who make agave syrup crush the juice from the fibers. To further soften the leaves, I tried boiling them for a while. I also put them in my food processor which did a good job of separating fiber from pulp.

You can also tease out the pulp with a knife.

(We are all constantly experimenting to try to find what works best. A woman who attended my presentation said she has cut up a small agave heart and cooked it in her large slow cooker for three days.)

So once you’ve gone to the trouble of getting pulp, what do you do with it? Here’s where the experimenting comes in. I’ve combined it with water to make a murky homemade agave syrup. You can use it to season anything you want to sweeten a little. For the Agave Fest demonstrations, I’ve made a mixed squash, nopalito, and onion saute and added some of the agave pulp. It adds a subtle sweetness and everybody loves it. I also used the pulp to mix with some ground popped amaranth and ground chia. Added a little commercial agave syrup. Formed little balls, firmed up in the fridge, then dipped in melted chocolate. Yum!

Of course, by the time I served the food, it was nearing 7:30 or 8 p.m. and everybody was starved so it all tasted especially good!

Want to learn more about wild desert foods and how to prepare them? My book American Indian Cooking: Recipes from the Southwest tells how the Native Americans used the wild plants for food. Cooking the Wild Southwest gives modern recipes for 23 delicious Sonoran Desert plants. There are all available at Native Seeds/SEARCH, online or in the retail store.