Hello everybody. It is Carolyn today with an exciting new book for you. I’ve been studying and writing about edible wild plants of the Southwest deserts for more decades than I want to fess up to, and one of the most energizing things for me is when other people catch the bug and begin gathering and experimenting.

Last year we had John Slattery’s great book Southwest Foraging with colorful photos to help us identify plants new to us (see review here). Now we have even more riches in Desert Harvesters’ new book Eat Mesquite and More: A Cookbook for Sonoran Desert Foods and Living.

The 170 recipes range from the very simple to lightly challenging. While heavy on dishes using mesquite, the book includes recipes for some less exploited plants such as desert ironwood, palo verde, wolfberry, and creosote (creosote capers!).

One of the most exciting things about the book is the range of contributors. While there are familiar names in the local foraging world, including fellow Savor Sisters Muffin Burgess and Amy Valdés Schwemm and myself, Janos Wilder, Brad Lancaster, Barbara Rose, Jeau Allen, and Jill Lorenzini, you will also find dozens of other folks who have also shared their recipes. What fun to see how cooks have included Sonoran desert plants in favorite family recipes. That’s exactly how to introduce a new food to family members leary of something strange—by incorporating it into something familiar.

This book goes far beyond recipes with essays on solar cooking, neighborhood water harvesting, and medicinal uses of some of the plants.

Ethnobotanist Dr. Richard Felger, who was my first mentor and thus has been writing about and advocating for  “wild agriculture” even longer than I have, contributes an article that tells us that 10,000 years ago Prosopis (mesquite) formed the nutritional foundation of some of the first human populations along the Pacific Coast of South America, long before the use of corn in their society. And we do know that mesquite was also the staple of the desert Tohono O’odham. As Dr. Felger has been advocating for decades, it is time we begin (or go back to) fitting our food production to fit the climate rather than changing the environment to fit the crop just as earlier desert inhabitants did.

Now for a recipe. For years the artists in Cascabel have put on a pancake breakfast in the beautiful San Pedro Valley. Here is the recipe they have used, developed by Pearl Mast. 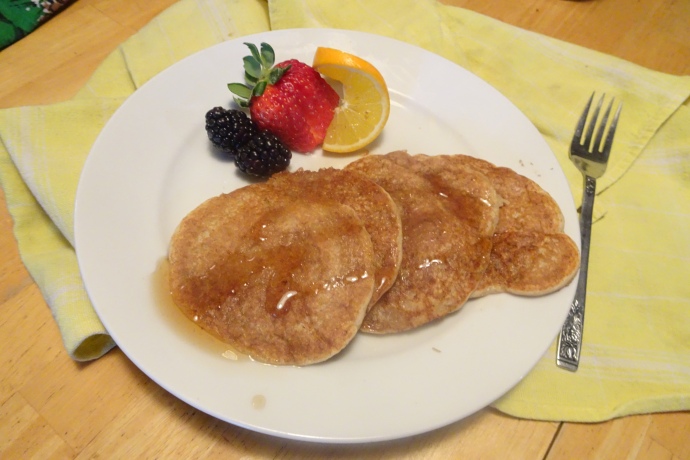 Nothing beats mesquite pancakes on a winter morning.

In a large bowl, mix together dry ingredients. In a small bowl, whisk together egg, oil, 1 cup of milk and vinegar. Add wet ingredients to dry. Add more milk to thin the batter. Cook on medium heat and enjoy with your favorite syrup or toppings.

Carolyn Niethammer writes about edible wild plants of the Southwest deserts in her books American Indian Food and Lore, The Prickly Pear Cookbook, and Cooking the Wild Southwest. They are available at the Native Seeds/SEARCH store or on-line bookshop or your favorite on-line book seller.