“There is another World, but it is in this one.”  W.B. Yeats

(The photo above is of a young hummer from a nest about three years ago, again here in the yard. At the end of this post is a “recipe” to invite hummer friendly nests into your world.)

Aunt Linda here on a very gusty March morning. Good thing that spiders provide their silky webs to the world, or the tiny nest right outside our door and it’s contents, might have been catapulted into oblivion.  The full moon is setting in the West, the direction I am facing as I write.  It’s white light is being thrown about as it passes through mesquite branches in a still beautifully dark sky

We can practically taste Spring on our tongues here in the Old Pueblo.  The ancient call of regeneration is in the air. Plants and Pollinators alike are in full swing. Native and non native bees are at the stone fruit trees, Birds are wooing one another with their lyrical mating songs.  It is easy to forget the function some birds play in pollination.

Pollination by birds has its own name: “ornithophily”.  Hummingbirds, Orioles, and nectar seeking birds are but a few types of birds that pollinate native plants, trees, and crops and that animals (including humans) eat.

What re-focused me on ornithophily – was the humming bird nest, (right outside the front door), that a female hummer built about 19-20 days ago. Watching her secure the nest was fascinating. For about 5 days, she brought gathered materials, using beak, chin, wings and her little bird rump to form and secure the nest inside and out.  When she was ready,  she laid her first egg. The second was the laid the very next day. Throughout this process, I watched her bring materials, such as spider webs, to the nest.  Intermittently, she would feast on the offerings of tubular flowers as well as upon tiny insects (that move in small, but visible, insect-clouds) high in the air;. Her graceful, skillful, movements  allowed her to move easily among the flowers and to pick insects out of mid air.

This whole episode opened my eyes and interest WIDE OPEN. I began researching the hatching time for baby hummers, which is approximately 15 to 16 days.  I stayed well away from the nest.  Until yesterday; which was day 16.  When she left to forage I carefully approached the nest, (skillfully built higher than many a predator can reach) and higher than my eye level.   Careful not to touch the nest (or any leaves around it)  I held my camera higher than the nest, and saw via photo that the first baby bird had hatched. (note: it is not the birds “sense of smell” that I am careful not to touch around the nest and leave a scent, but that of predators !)

Anatomy of a Nest:

I have been studying up on humming birds nests. The bottom and the wind side of the nest is often thicker than the downwind side. The thinner sides allow for breezes to pass though on warmer days, when cooling is needed. Interestingly, hummingbird nests built in the earlier and cooler springtime are thicker and deeper than those built in the warmer summer months. She camouflages the outside of the nest with materials from the immediate environment. Here in Tucson many hummingbird nests have tiny mesquite leaves and strips of bark from native trees. The insides are made soft with gathered materials – over the years I have seen (in this yard alone), nests made from cotton swiped from cotton plants that we had hung on the porch from the winter, wool from a mask made of sheep hair, stuffing gathered from outdoor furniture that had seen better days. You can clearly see in the photos in this post, the innovative use of spider webs in nest construction. She uses them to secure the base, as well as to build in the capacity for elasticity into the nest – so it remains in tact even as the babies grow.

The photo below is of the nest as it is being constructed – about day three or four.

Usually, a female hummingbird will build and fasten the nest onto the part of a tree or bush where branches overlap, crossing each other, or make a “Y”  for stability This is so the eggs or baby birds do not get catapulted off in one of springtime’s storms, or gusty winds like we have had here over the past few days. Note in the photo above, how the spider webs are woven into the nest, as well as how they fasten it to the base branches.   I have read that they will actually test and retest the site by repeatedly landing on it to see how it will hold. This skillful construction has helped the nest stay secure during the past few days of wind, where as this little egg (a robin egg perhaps?) did not fare so well. The broken egg photo was taken a three minute walk from the hummer nest. (note: a reader skilled in Birds wrote me to say she things the broken eggs are a Curved-bill Thrasher! Thank you!!!) 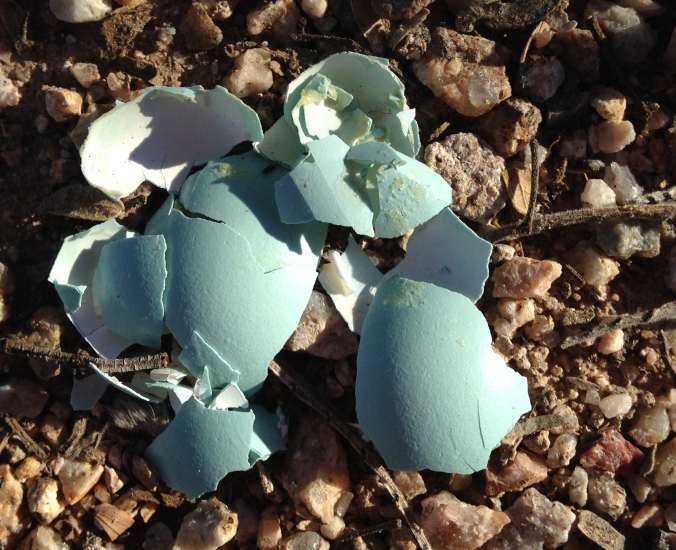 About 18 years ago, a docent at the Desert Museum shared a story that opened up the way I thought about the interconnectedness of things in nature. After meticulous research in to the types of humming birds,  plants and habitat requirements, the Desert Museum Built a beautiful state of the art Humming Bird sanctuary/exhibit. Once the Hummingbirds were introduced, all appeared to be well – they fed and flew contentedly, living the lives hummingbirds do. All appeared  fine in hummingbird paradise – except that no nest building was going on.

As you can imagine, this was taken very seriously and after thorough research, it was discovered that no spiders had been introduced into the ecosystem of the site.When spiders were introduced to the hummer system, and webs were spun and thus available, the hummers began building nests. For me, this is very profound. This deep interconnectedness of spider and baby hummer. It gives practical meaning to the idea of the web of life. It is also quite a gorgeous thing to behold – this gathering of spider webs by agile hummers. The first time I saw it, it was only because the shiny sliver strands were backlit by the sun. The female gathered them in her beak, with a kind of sweeping motion of her body.

Like tiny hummer nests in and of themselves, hard boiled egg whites are well built and can hold precious cargo. Packed with protein eggs are a healthy and really tasty treat. Use herbs from your own garden or local surrounds to flavor your tiny-nest- snack.

Use your favorite Deviled egg recipe, most people have their favorite one. In case you have not made them in a while, here is a basic recipe.

-salt and paprika to taste.

-Herbs from the garden – here I used cilantro, parsley and pepitas (pumpkin seeds), even chiltepin.  If you use tea eggs, which we are going to revisit next month, you can enjoy the spider web like pattern/motif on the outside of your tiny nest !

-I often chop up the egg whites that break as I am preparing them; and add it to the “deviled egg” mixture – it makes it more like a True Egg Salad, within the tiny egg-white-nest.

– Make sure to “weave in” your version of silk silver spider strands of elasticity into whatever you are incubating.

Recipe to Make Your Own Yard/Surrounds Hummer Friendly :

*Provide nectar by planting their favorite plants (find out what is local to your region). Here in Tucson that includes wild and domestic tubular flowers such as Penstemon, which is a flower that grows wild here.  Hummers likely co-evolved with long, tubular flowering plants (think the length and shape of their beaks and tongues …)   and move deftly to such crimson red flowers in the herb garden, salvias , trumpet vine, penstemon, ocotillo blossoms, chuparosa tubes. They are also insect eaters, and pick the tiny, only to be seen if back lit, insects tight out of the air.

*Leave spider webs – and lichen (!) if you live in a region with lichen, for nest building.

* make sure there is a water source for them

The photo above is the one I took yesterday afternoon, of the first hatchling.

I am happy to share that the nest rode out a very gusty night and morning just fine.

Let’s all send some appreciation to spiders for their webs, even when we might find them a little creepy – and to the skillful nest building of female hummingbirds.

8 thoughts on “To Build A Nest: Hummingbirds and Elasticity (In honor of spider strands and tiny birds)”