Carolyn Niethammer here today with this celebratory post. The Savor Sisters, the five writers who bring you Savor the Southwest, got together this week to celebrate the first anniversary of our wide ranging blog about the glories of Southwest food traditions –  traditional, modern, wild and cultivated. The Savor the Southwest month always starts out with Aunt Linda who frequently writes about her bees, recipes with honey, and even making cheese from milk from cows on her ranch. Her posts are lyrical and sometimes spirtual. On the second Friday, you hear from Tia Marta (Muffin Burgess), our ethnobotanist who keeps an eye on what the desert is producing, traditional Native American agricultural products, and ingredients she sometimes uses in her Flor de Mayo products.  I take the third Friday and write about edible desert plants, Southwest specialties and interview other interesting folks in the food world.  On the fourth Friday we hear from Jacqueline Soule who has been taking us through her book Father Kino’s Herbs among other subjects. That’s her gluten-free barrel cactus seed cake Muffin is slicing in the photo. You’ll get the recipe later this month. So far we have only heard from Amy Valdes Schwemm, producer of fabulous spices, on the occasional fifth Friday, but she will be writing more frequently in the coming year.

We are grateful to all of you readers who join us each week as we explore and celebrate the culinary delights of this fabulous area here on the Sonoran desert where we are so privileged to live. Every celebration needs something sweet, so today I’m going to give you a recipe for an easy and delicious mesquite cake that uses whatever fruits are in season. I used peaches and grapes, but plums, pears, apples or even prickly pear would be great additions. This is good for brunch or a not-too-sweet dessert.

Preheat oven to 350 degrees F with rack in middle. Chop fruit. Lightly butter a springform pan. In a small bowl, whisk together flour, baking powder, salt and spice of choice. In medium bowl, beat butter and sugar with an electic mixer until pale and fluffy. Add eggs one at a time, beating well after each addiotn, then beat in vanilla. At low speed,  add flour mixture until ljust combined. Spread batter evenly in pan. 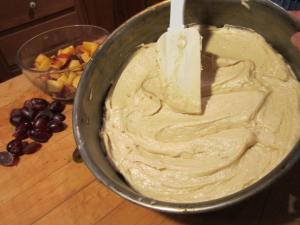 In a small bowl, stir together the topping mixture and sprinkle evenly over the cake. 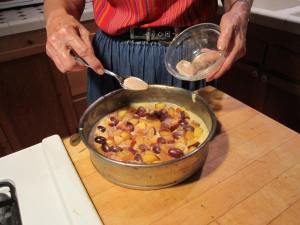 Put in preheated oven for 45 to 50 minutes. As the cake bakes it will rise over the fruit. Cake is done when it is golden brown and top is firm but tender when lightly touched. Cool in the pan for around 10 minutes and then remove the sides of the pan. Serve warm or at room temperature. A little whipped cream never hurt anything. 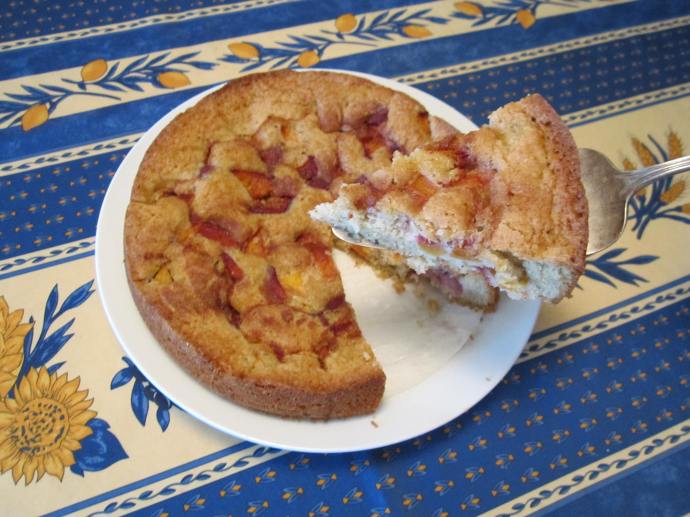 Yummm, warm and fragrant from the oven.

Want more delicious recipes using ingredients from the Southwest?  I have lots of ideas for you. In Cooking the Wild Southwest, I introduce you to 23 easily identified and delicious wild plants of the arid Southwest. The Prickly Pear Cookbook is all about the fruits and leaves of the nopal plant. In The New Southwest Cookbook, you’ll meet some of the most innovative professional chefs in the Southwest and get to try the recipes they serve in their restaurants.

4 thoughts on “Savoring Our First Anniversary (and Mesquite Cake)”