The tall stately velvet mesquite tree (Prosopis velutina) is not what most people think of as a herb! But this graceful tree with durable wood was used as a medicinal herb as well as a source of food, tools, and building materials. 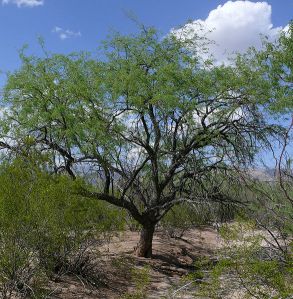 The velvet mesquite can grow into a lovely tree especially when given minimal pruning.

Sore throats were treated with a hot tea blend of the clear sap plus inner red bark, while stomach aches were treated with a tea made from the leaves. Toothache was treated by chewing the root. For flagging appetite, a tea made from the leaves was taken before meals. Along with medicinal uses, the bark was used for baskets and fabrics, the wood used for tools, building and firewood, and perhaps most importantly, the pods are a protein-rich food.

The clear mesquite sap (usabi in O’odham) is not only edible but a highly palatable treat, eaten right off the tree. It was often collected and saved, sealed in pottery vessels, and fed the ill (children especially) to help bolster flagging appetites.

Mesquite trees can produce a clear-ish sap, like this cherry sap, that has a sweet flavor. Photo by T. Bresson.

Mesquite seed pods (wihog in O’odham) were an important food source for the natives, and are becoming increasingly important today as research determines how healthful they are for humans. Mesquite pods, and their meal and flour, are considered a “slow release” food due to galactomannin gums which have been found to lower glycemic responses. Their glycemic index is 25 percent, compared to 60 for sweet corn, and 100 for white sugar. I believe some of my “Savor Sisters” will discuss this issue further. Today I am looking at the medicinal uses and how to grow this marvelous plant.

Mesquite pods fresh off the tree are a tasty treat.

Of vital importance to a select number of folks was the use of mesquite against hair loss. This treatment was used by men only, and consisted of the black sap that oozes from mesquite wounds (not the clear sap) mixed with other secret herbs and applied to the scalp. Mesquite herbal soap for “macho” hair is still available in parts of Mexico.. 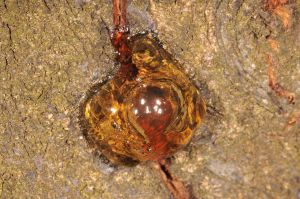 . The dark sap that oozes from mesquite wood is said to be good against hair loss.

Our Sonoran Desert native velvet mesquite is slower growing than the grassland mesquite species from Argentina and Chile, but it is a far better choice for a number of reasons. Unlike the non-natives, velvet mesquite is well adapted to our climate, and it feeds the native animals. Leaves serve native butterfly larvae and Gambel’s quail. The pods nourish almost every Sonoran Desert inhabitant, from bunnies and squirrels to coyotes, javalina and humans. The velvet mesquite also has deep tap roots, making it much less likely than the non-natives to blow over in the swirling summer winds that often accompany the monsoon rains.

Since all mesquites can cross, it is now difficult to find pure velvet mesquite. If you go far from town you may get a pure species. Harvest a handful of seed pods, then plant them, pods and all, where you want your tree to grow. Water well and stand back. When about twenty little seedlings have several clusters of true leaves, select the one or two with the most velvety blue leaves. Keep watering but do not fertilize. We started a tree this way and in three short years it grew to a sturdy and robust 20 foot tall tree. In the same time frame, mesquite trees we planted from 15 gallon containers were scarcely any taller than when they were planted –about seven feet tall.

No need to remove the seeds from the pod prior to planting. Just put them into the soil, pod and all and keep evenly moist.

Mesquite are drought toleratant once they are established, but they grow more quickly and larger with a thorough soaking of root zone once every month or two during the warm months.

Do not fertilize mesquite trees or any plant in the pea family. They have a special relationship with bacteria that fix nitrogen out of the soil atmosphere. If you want to encourage more rapid growth of your mesquite, mulch it with an organic mulch, such as the leaves that have dropped off it or composted organic material from a nursery. 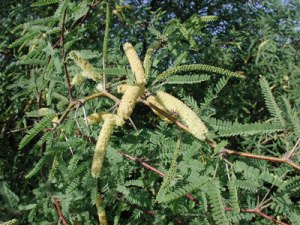 Mesquite blooms are many flowers on a single stalk, termed a catkin. Photo by M.J. Plagens.To learn more about the native animals that use mesquite trees, visit my blog this month at: http://nativeplantwildlifegarden.com/vital-velvet-mesquite/

To learn more about how native animals use this plant, visit my blog on: http://nativeplantwildlifegarden.com/vital-velvet-mesquite/

This article copyright Jacqueline A. Soule, 2014. The topic is covered more extensively in my book “Father Kino’s Herbs: Growing and Using Them Today” (2011, Tierra del Sol Press, $15). If you live in Tucson, I hope you will consider purchasing a copy locally at Antigone Books, Arizona Experience Store, Magic Garden, Mostly Books, or Rillito Nursery.