A colorful harvest is happening at Tucson’s Mission Garden, and it’s time to celebrate!   Tia Marta here with an invitation:   Every Saturday for the weeks of autumn there will be foodie festivities to enjoy at Mission Garden. Come masked and socially-distanced for open-air learning, tasting, photography and fun.  There’s a big one this coming Saturday Oct.17, 2020 not to miss! 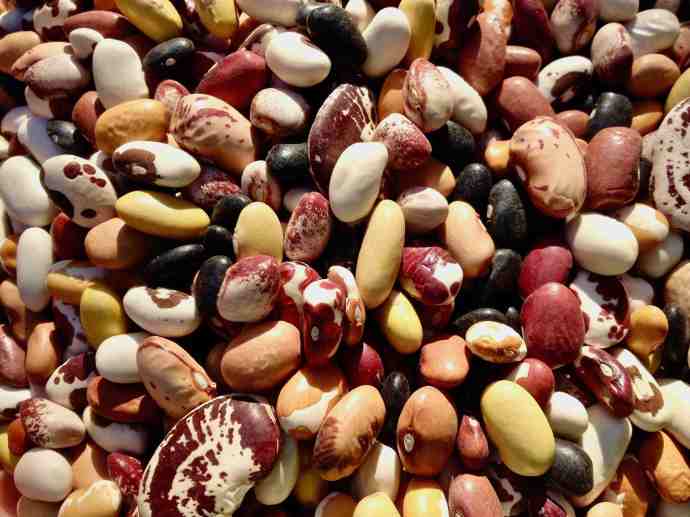 This colorful heirloom bean mix, known as Tom’s Mix, is like a multi-cultural metaphor–bringing the agricultural wisdom of 14 different Southwestern cultures together in one incredibly delectable soup. You can taste it Oct.17 at Mission Garden!

Tohono O’odham 60-day corn could be the fastest maturing and most desert-adapted corn known. It was domesticated by the Desert People long ago. Mission Garden’s volunteers are honoring it and helping to bring it into wider cultivation. Come taste a tortilla made with this ancient and nutritious desert crop!

Ancient Chapalote corn (known from 4100-year-old archaological sites in the Tucson area) and pre-Columbian Tohono O’odham 60-day corn are celebrated at Mission Garden. What a beautiful way to pay proper respect on Indigenous Peoples’ Day! Our mutual thanks to Native ancestors for these gifts from the past which can help us into an unsure future!

All of these Three Sisters–Corn, Beans and Squash–are grown together at Mission Garden in traditional ways, demonstrated in different “time-line” gardens.  Come observe and learn how you might plan your own garden next summer season. 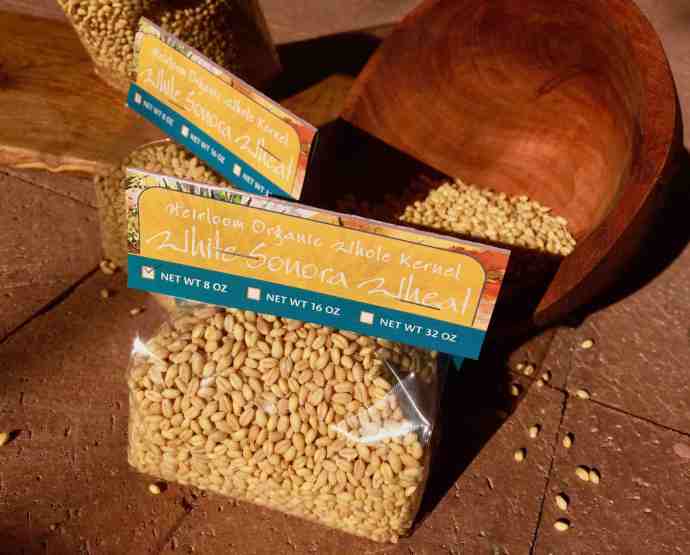 As the evenings get cooler, it will be time to plant a winter/spring crop of ancient White Sonora Wheat, a golden, low-gluten wheat-berry introduced to our area by Padre Kino over 300 years ago. It will be packaged and available for sale at the Mission Garden’s Oct.17 gastronomy book launch event.

Tastes of the Southwestern heirloom bean Tom’s Mix soup and tastes of traditional O’odham Tepary Beans will be available at Mission Garden, Saturday, October 17, 10am-12noon.  Look for the Flor de Mayo table under the north ramada that day.  Also available will be packaged White Sonora Wheatberries with recipes for cooking them for pilaf or for marinated wheatberry salad.  For more wheatberry recipes check out this post.   A portion of the Oct.17 sale of these heirloom foods will go to support Mission Garden’s programs.

Author Carolyn Niethammer and her latest Southwestern foods book will be in the limelight this Saturday Oct.17 at Mission Garden. A DESERT FEAST describes in delicious detail a 4100-year history of foodways in Tucson, Arizona–named UNESCO’s first International City of Gastronomy!

All of Carolyn Niethammer’s books are gastronomic inspirations, but THIS one —A Desert Feast–bears the crown!  It is rich in history and recipes.  Come get your copy signed Oct.17 and discuss traditional foods–wild and domestic– with the author herself.

“A Desert Feast” Tells Story of a Heritage Grain

In 2015 Tucson was named the first U.S. UNESCO City of Gastronomy. That word “gastronomy,” as defined by UNESCO, isn’t about fancy restaurants, but rather it refers to a region’s entire food system. A Desert Feast, Celebrating Tucson’s Culinary History, my new book, draws on thousands of years of food history to explain the UNESCO designation. The book traces the influences of Native American, Mexican, mission-era Mediterranean, and ranch-style cowboy traditions. It is is a food pilgrimage, full of stories and recipes stretching back to the earliest residents of the Santa Cruz Valley. You’ll read how the earliest farmers first learned to grow corn beginning in 2100 BC, where the Hohokam built elaborate their elaborate irrigation canals, and how the arrival of the Spanish changed everything.

Like life, the big story is made up of many small stories. One of them is how in the late 1690s, Father Eusebio Kino brought winter wheat to Upper Sonora, filling an important food niche. Today we still eat this crop, ground into flour for delicious pastries or eaten whole as in this salad, in the photo below.

The volunteers at the Mission Garden in Tucson always grow a large field of Sonoran White Wheat to take us back to an earlier time when fields of this grain grew along the banks of the Santa Cruz River.

This is modified from a dish made by Chef Janos Wilder and served at Downtown Kitchen+Cocktails in Tucson. Chop all the fruit into pieces about the size of raisins. This takes well to a fruit flavored vinaigrette. If you have any fruit vinegars or olive oil, this is a good place to use them.

Cover wheatberries with 2 cups water, bring to a boil, cover and turn heat down to a simmer. Cook  45-60 minutes until tender but chewy.  Transfer to a medium bowl and add fruit, carrots and seeds. Make the dressing put the oil in a cup and stir in the honey and mustard. Dribble the vinegar in while whisking vigorously with a fork. Add to other ingredients and stir to combine.  Refrigerate. Just before serving stir in shredded spinach and top with crumbled goat cheese.

A Desert Feast: Celebrating Tucson’s Culinary Heritage tells the history of how residents of the Santa Cruz Valley have fed themselves over thousands of years, why they are still eating some of the same foods over that time, and how that led to Tucson’s designation of the first American city to earn the coveted UNESCO City of Gastronomy. You can order the book from your favorite bookstore, on-line, or from the Native Seeds/SEARCH bookstore.